Filter By Travel Journal Behind The Scenes Travel Tips (All Categories)

Experience the magic of Ankgor Wat

Angkor Wat is one of the Seven Wonders of the World and a must-see for any bucket-list traveller! Experience the wonder of Angkor Wat by visiting at sunrise. Read more... 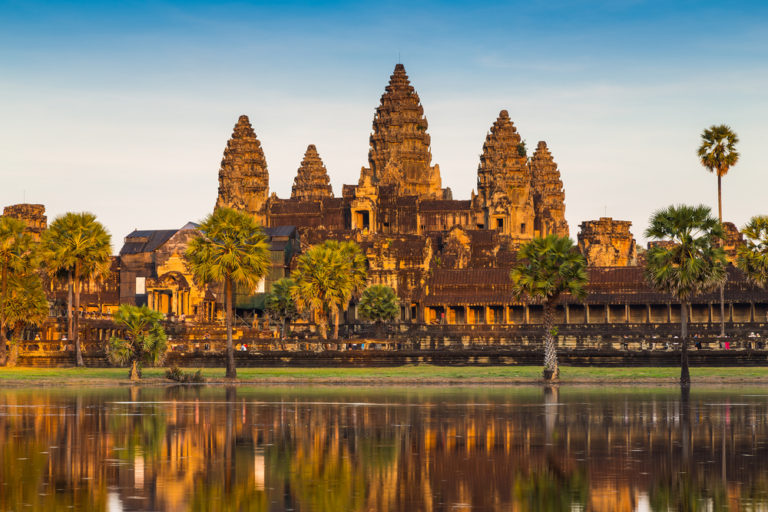 Angkor Wat was once the centre of Khmer Kingdom. Today, is the largest religious monument in the word, spanning an incredible 208 hectares.

It was originally designed to be an earthly replica of the cosmic world’s Mount Meru, home of the devas in Hindu mythology, as tribute to Hindu god, Vishnu. In the 13 century, however, it became a Buddhist temple.

This architectural masterpiece is adorned with intricate bas-relief Hindu imagery and centuries of history. It is surrounded by a moat and features a 250 metre long sandstone causeway that allows access. It so much more than the temple you might recognise from the scene of Tomb Raider!

Angkor Wat opens at 5am so visitors are able to watch the sun rise. It is the most magical time of day to visit. The natural spectacle will take your breath away. We recommend taking a torch (it will still be dark when you will need to get there), a snack and some bug spray.

You can easily spend a day or two here without seeing the same thing twice, but if time is of the essence, we recommend blocking out at least three hours of the day to explore. Early in the morning is the ideal time, as the bugs won’t be out in force and the heat won’t be as intense.

A tip for temple etiquette – dress modestly. Out of respect (the temple is still in use!), you will need to have your upper arms and knees covered to get in to the highest level of Angkor Wat.

Are you ready to experience the wonder of Angkor Wat? Contact us to make it happen!

+ Share
Facebook
LinkedIn
Twitter
Email
|
365 Calendar Wherever next? Check out our 365-day inspiration calendar. View Travel Journal Postcards from everywhere. Where do our well-travelled consultants love to go on holiday? Find out 24/7 Assistance Around the World, around the clock. Learn about our 24/7 Emergency Assist service. Learn more Travel Tips Top travel tips. We've been there, done that and have the top tips to prove it. Take our advice