Northwest Passage, In the Wake of the Great Explorers

Journey beginning at Vancouver, and ending at Halifax, 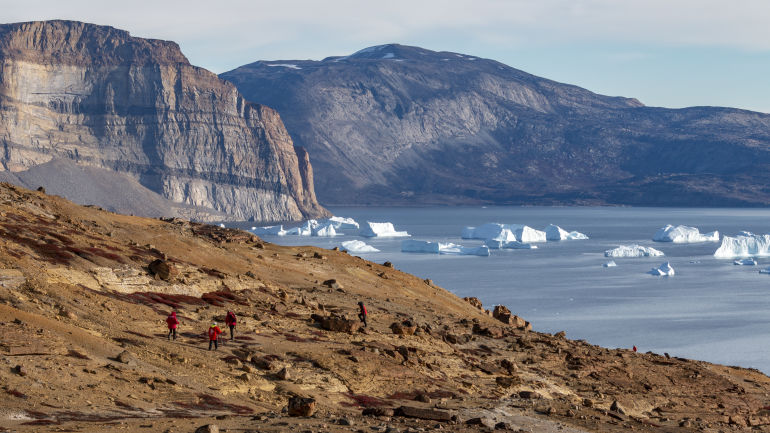 Be among the few to sail in the wake of great explorers as we attempt a journey through the legendary Northwest Passage. Experience the raw and daunting beauty of the Arctic on a rarely-travelled voyage aboard our advanced expedition ship, one of the few vessels equipped to sail these waters in premium comfort. The journey starts from Vancouver with a flight to Nome, and then you’ll head straight to the icy waters of Arctic Canada. The expedition team will look for chances to explore inlets and take you on small boat cruises and landings. After, you will head to Greenland, where you will visit Inuit settlements and the UNESCO World Heritage Site of the Ilulissat Icefjord. The expedition ends in Halifax in Canada.

Arrive Vancouver and check in to your hotel. Bustling Vancouver is surrounded by a picturesque range of mountains, making it a popular tourist destination all year round. Vancouver is a young city with cultural and natural attractions that appeal to every type of traveller.

After breakfast, you will fly to the gold rush town of Nome, where your epic voyage begins. The colourful local history of this frontier town is on display at the Carrie M. McLain Museum. Embarkation on MS Roald Amundsen.

You sail through the Bering Strait, before heading into the Chukchi Sea. The Expedition Team will start their lecture program preparing you for the days ahead.

As you reach Point Barrow, the northernmost point of the USA, you enter the Beaufort Sea. Keep a sharp eye open here for Bowhead and Grey whales and you might also start seeing sea ice.

Journey continues into the Amundsen Gulf, where we hope to observe the remarkable Smoking Hills – an amazing sight, with smoke billowing from the cliffs on the east coast of Cape Bathurst. Local Lignite – a combination of shale and pyrite – spontaneously ignites when exposed to air, due to the erosion of the hills, causing this photogenic phenomenon.

We aim to sail into the heart of the Northwest Passage. Since the late 15th century, the search for this fabled seaway through the Canadian Arctic was a holy grail for hardy adventurers.

There are records of almost 40 expeditions that sailed these waters. The first recorded attempt was the voyage of John Cabot in 1497. The most famous journey here was James Cook’s failed attempt to sail the Passage in 1776, and of course the ill-fated Franklin expedition of 1845. The first to conquer the Northwest Passage by ship was Norwegian explorer Roald Amundsen on an expedition that lasted from 1903 to 1906.

Ice condition vary from year to year, and that is why this voyage still if one of a kind. Subject to favourable conditions, the Expedition team hopes to be able to show you some of the following places:

Ulukhaktok is a settlement on Victoria Island in the Canadian Arctic Archipelago. Due to the remote location, the 460 people of Ulukhaktokk have had little to do with the rest of the world and remain traditional in many aspects of their daily life.

Cambridge Bay is located on Victoria Island. In Inuinnaqtun it is called ‘Iqaluktuuttiaq’, meaning a ‘good fishing place.’ The hamlet is located close to the Ekalluk River, which is famous for giant char. It is rich in archaeological history and blessed with abundant fish, seals, geese, muskoxen and caribou.

Gjøa Haven honours the Norwegian explorer Roald Amundsen, who wintered here from 1903 on the Gjøa expedition. He was in contact with the local Netsilik Inuit people and he learned a lot from them about survival and travel in polar regions.

Fort Ross is a trading post established in 1937. There are two small huts ashore that are maintained by the Canadian Coast Guard.

Beechey Island is closely linked to the history of exploration of the Northwest Passage. The most famous voyage is the British expedition led by Sir John Franklin. Two ships sailed into the passage in 1845, but neither the ships nor any of the 129 crew members were ever seen again. It is known that the Franklin Expedition over-wintered on Beechey Island in 1845-1846.

On the south coast of Devon Island lies Dundas Harbour, an abandoned settlement with an old Royal Canadian Mounted Police camp and several archaeological sites. Come ashore to see the ruins of some of these buildings, along with an impressive Thule site.

The picturesque hamlet of Pond Inlet, also called ‘Mittimatalik’ in Inuktitut, is a traditional Inuit community, located on the northern tip of Baffin Island, near the eastern entrance to the Northwest Passage. Pond Inlet is surrounded by mountain ranges, with several dozen glaciers, scenic fjords and inlets, ice caves, geological hoodoos and drifting icebergs.

In addition, you will be sailing in amazing straits with unique nature and hopefully enough ice to make it for excellent wildlife spotting.

You cross the Davis Strait, named for the English explorer John Davis, who led three expeditions in the area between 1585 and 1587. Davis was the first to draw attention to seal hunting and whaling possibilities in the area, and to show that the Newfoundland cod fisheries extended this far north.

Ilulissat is set in the stunning scenery of the Ilulissat Icefjord, a UNESCO World Heritage Site. Just outside the town, at the mouth of the fjord, you can often see enormous icebergs that have run aground. They originate from the Jakobshavn Glacier, one of the most productive glaciers in the Northern Hemisphere. The icebergs make their way down the 20 km fjord before entering Disko Bay.

Sisimiut is situated 40 km north of the Arctic Circle and is a modern settlement that maintains ancient traditions. Come ashore to explore the colourful town; visit the small museum, hike in the hills and shop for local handicrafts.

The capital of Greenland is the political and social centre of the nation, and the oldest town in Greenland, founded by the Danish-Norwegian missionary Hans Egede in 1728. The city’s location is lovely, set at the mouth of one of the largest and most spectacular fjord systems in the world.

Ivittuut is a stronghold for musk oxen. The settlement was built on top of the so-called Norse Middle settlement where,Vikings settled 1,000 years ago. Archaeologists believe it was the last settlement established, and the first to be abandoned in the area.

It is time to say goodbye to Greenland, and head for another stretch of open sea. We will cross the southern part of the Labrador Sea, this time towards Newfoundland and Labrador in Canada.

Red Bay, on the coast of Labrador, is a classic outpost of Atlantic Canada, a coastal community with a population of less than 200. In 2013, Red Bay Basque Whaling Station was designated a UNESCO World Heritage Site. Wander around the former whaling town and learn about its interesting history.

Corner Brook is located on the west coast of the island of Newfoundland and has approx. 20,000 inhabitants. The area was first surveyed by Captain James Cook in 1767. Explore the charming town centre or enjoy its many walking trails amid vibrant autumn leaves.

Every great adventure must come to an end. Enjoy time with Expedition Team to look back at experiences shared and recapping our voyage.

Day 29 – Halifax – End of the Expedition

The British established Halifax 1749. Enjoy the views from the Citadel-crowned hill overlooking the city. This colourful gateway town is both hip and historic and well worth an extra day or two before you head back home.

+ Share
Facebook
LinkedIn
Twitter
Email
|
Travel Tips Top travel tips. We've been there, done that and have the top tips to prove it. Take our advice Behind the Scenes The extra mile. From finding deals, to dealing with sticky situations. Read about how we go further 24/7 Assistance Around the World, around the clock. Learn about our 24/7 Emergency Assist service. Learn more How we do it VIP service, with very important savings. Find out why 'more personalised' means 'less expensive'. Find out